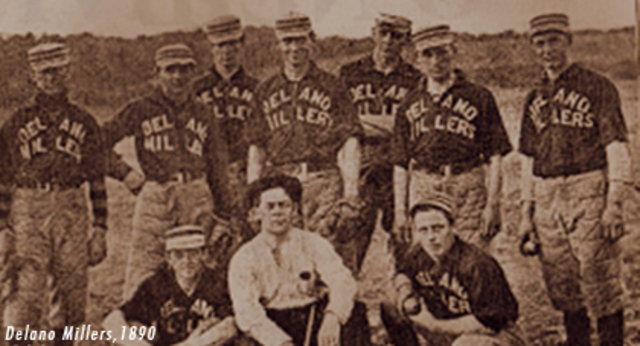 Delano was incorporated as a village in 1876, and baseball has been a part of the town ever since. The first team was known as the Delano Millers, and they were known as the “Terrors of the ‘90s.”

Traveling to games was not easy, for there were not as many teams around, and traveling was done by horse and buggy or by train.

As more teams popped up around the state, leagues needed to be formed for better organization. One of the first leagues in the state was the Old Wright County League in 1923. Delano became a member of this league and was sponsored by the American Legion.

The Millers participated in two state tournaments, in 1930 and 1932, before being sponsored by the Delano Fire Department in 1935 to 1939. Delano then switched leagues to the Crow River Valley League with teams from Chaska, Mayer, St. Boni, Watertown, and Young America. During this period, the Millers made it to the state tournament in 1935.

In 1939, Delano went back to the Wright County League, which was one of the strongest leagues in the state. They changed their name to the Delano Colts, and joined Cokato, Darwin, Howard Lake, Kingston, Maple Lake, Waverly, and Watertown in the league.

The Colts continued their winning ways by going to the state tournament in 1940, 1941, and 1942, finishing as runner-up in 1941 and 1942. In 1945 to 1947, the Colts again changed sponsors, this time to the St. Mary’s Youth Club of Czestochowa. During these three years Delano went to the state tournament twice. In 1948, Father Handzel, Perry Ditty, Dutch Styrbicky and Fred Parsons organized the Delano Athletic Club, which became Delano’s new sponsor, and still remains to this day. The Athletic Club quickly went to work, making their first assignment installing light towers for night\ 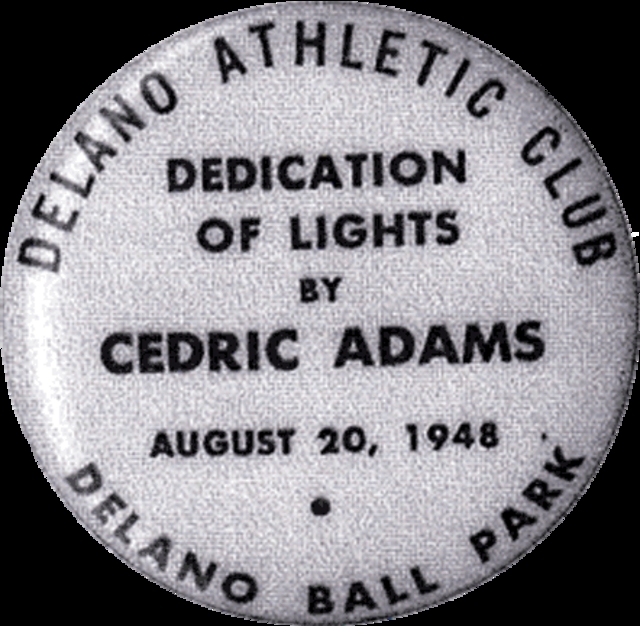 baseball games. The dedication game was July 4, 1948 with WCCO radio personality Cedric Adams as master of ceremonies. It was that year that the Athletics, as Delano was known, joined the North Star League, where they currently reside. The league played Class A ball, which meant that each team could have two salaried players. Delano returned to a Class B team in 1953, which meant no players were paid. This was done to create more fan interest.

Delano baseball has been through a lot over the years. The A’s have participated in 20 state tournaments (most recently in 2014), winning the Class C Championship in 1988.

Many talented brother combinations have played for Delano, as well. Three Dainsberg brothers, Bud, Harold (Snooks) and Stan, played on the same team in the early 1940s. Rich, Paul, and Tom Ditty played together for many years in the 1960s. In the late 1980s and 1990s, multiple brother combinations were prevalent. Paul, Tom, Dave and Mike Jaunich shared the field, as well as the Muckenhirn trio of Brian, Todd and Brent, and the Traen brothers, Tom and Todd. When the Athletics went to the state tournament in 1992, it was more like a family reunion than a baseball game.

Many individual honors have been bestowed on Athletics players through the years. Delano has three players who have been elected to the prestigious Minnesota Baseball Hall of Fame. Perry Ditty was elected in 1966, Valentine “Dutch Starbuck” Styrbicky was elected in 1968, and Rich Ditty was elected in 1981. The previous players were also elected to the North Star League Hall of Fame, along with Ralph “Buzz” Bernick, Gene Bouley, Marshall “Bud” Dainsberg, Al Juelke, Jerry Litfin, Van Merriman, Frank Muckenhirn, Dick Shaver, Tom Ditty, Richard “RT” Traen, Jeff Janzen and Todd Traen.